We began our tour of Bantry with a tour of Garyvurcha Church and Graveyard (CO118-034001-). This 18th century protestant church lies within the remains of a walled graveyard with multi-denominational markers. It is a rectangular building constructed of a slate like sandstone that is seen throughout the graveyard.  This church recently underwent conservation to restore the west gable entrance and bellcot.  One interesting feature of this entrance way was the presence of an original construction timber which is still seen protruding from the stonework and is still in relatively good condition. In the east gable is neo-romanesque arch that presents as the entrance to the Earls of Bantry vault. Another interesting feature at this site is the famine plot which lies in the north west area of the site.

The Bantry Library, located on Bridge Street on the site of the old Bantry Mill,  was designed by Cork architect Patrick McSweeney in 1962, and developed and overseen by his assistant Harry Wallace. This modernist building, comprises a number of elements informed by Ireland’s heritage which ranged from prehistoric standing stones, to 19th century Martello Towers. Many of these elements are subtly interlinked however it was interesting to note that the individual components of the building are seamlessly executed in the style of an Irish megalithic wedge tomb. We could not do the interpretation of such a building justice here so we suggest reading this piece by Dr. Richard Butler. A replica millwheel was installed between 2000 and 2001 and is powered by what was the primary millpond of the Bantry Mills.  In 1837, Samuel Lewis states that this mill was capable of producing 12,000 bags of flour annually. 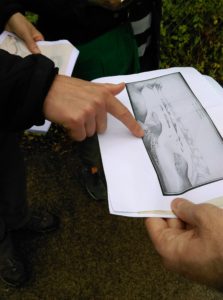 One key feature of the Deep Maps website, is the Thomas Philips view of Bantry (1752) which looks out over Reenrour and Reenbeg Point. This map provides details on the relative position of the area known as Newtown Village (Cromwellian settlement away from the older original fishing village) in Bantry, which was contemporaneous with the bastioned fortification (CO118-002001-) visible in the foreground. This 17th century fortification is roughly rectangular with pointed bastions at each corner, with a well recorded in its interior. Its association with the development of ‘Newtown’ (an area developed after the initial settlement of Ballygobbin or Bantry in the main square) is reflected in its record in the OS 25’ map as ‘Newtown Fort’. The fort is rather overgrown and difficult to make out at ground level however its outline is quite visible from an aerial perspective. There are no visible remains of the area known as ‘Newtown’ however some indication of the type of houses (slated houses and thatched cottages) located within the bay can be seen in Phillips rendering of the landscape. The house types vary and likely reflect an imagining of those types found at the site of Newtown.