Skip to content
Home » Past to Present » Art and Literature » A Coastal Poem?

When is a coastal poem not a coastal poem? Should the author of a West Cork poem have visited West Cork? James Clarence Mangan’s ‘Lament over the Ruins of the Abbey at Teach Molaga’ presents us with these and many other questions.

The Poem and Its Themes 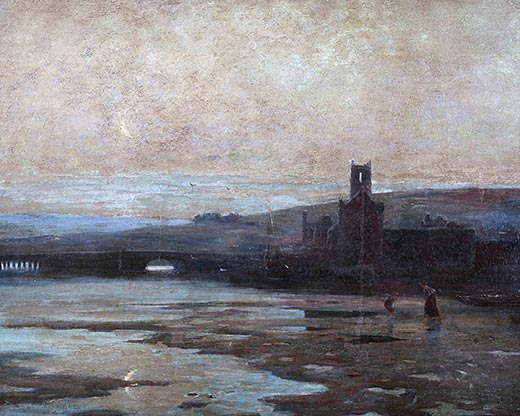 First published in The Nation the 8th August 1846, Mangan’s lyric poem in twenty quatrains gives dramatic voice to an unnamed figure who wanders at the edge of an estuary, at the head of which sits the ruined abbey of Timoleague (Teach Molaga).

The title of the original poem, ‘Machtnamh an Duine Dhoilgheasaig, nó Caoineadh Thighe Molaga’, translates as ‘Musings of a Lonely Person, or Lament for Timoleague’. Expressing sorrow and loss, the speaker laments the former unity of a building and community destroyed by Cromwell’s forces in the seventeenth century.

The original poem was written in 1816, at the end of the Napoleonic wars and the outset of a period of bleakly cold weather that affected the Atlantic seaboard in the aftermath of the eruption of the Indonesian volcano of Tambora (the so-called ‘year without a summer’). Meanwhile Mangan’s own experience of famine-struck Ireland surely contributes to the abiding atmosphere of change and loss.

Alas! alas! how dark the change!
Now round its mouldering walls, over its pillars low,
The grass grows rank, the yellow gowans blow,
Looking so sad and strange!

It is highly unlikely that the Dublin-born Mangan ever visited either the city or county of Cork. Apprenticed as a copyist and a clerk, Mangan was a legal scrivener until 1838, when he was appointed to the office of the Ordnance Survey.

In the 1830s, he came to know scholars and antiquarians such as John O’Donovan (the original for the character of Owen in Brian Friel’s play Translations), George Petrie, and Owen Connellan.  They gave him with raw translations of Irish language poetry and in the process inspired some of his greatest works, including ‘Lament over the Ruins of the Abbey at Teach Molaga’.

The poem’s topography encompasses a drowned river valley, where the Argideen River empties into the Courtmacsherry estuary on its way to the sea. The estuary is currently designated a Special Area of Conservation because of its distinctive mudflats, sandy and shingle beaches, reedbeds and tideline vegetation.

In an early topographical description of the Cork coast, Charles Smith observes that Courtmacsherry estuary is located two miles from the mouth of the sea, ‘on an arm of the ocean’ (1815, 242). Smith describes how the Argideen ‘glides’ in sinuous and intimate relationship to the building that it ‘washes’ along a semi-circular coastline.

The winding, serpentine shape of the estuary is also captured in Gabriel Beranger’s late eighteenth-century drawing of the castle, abbey, and town of Timoleague.

I turned away, as toward my grave,
And, all my dark way homeward by the Atlantic’s verge,
Resounded in mine ears like to a dirge
The roaring of the wave. 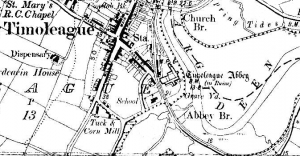 The drifting, sweeping, gliding, and washing of a body of water that is comprised of both river and sea has caused critics of the poem to lose their bearings. In a classic discussion of the poem, David Lloyd says that ‘contrary to what the various versions imply, the map will show that Timoleague is not on the edge of the sea’ (2016, 94). More recently, the critic Cóilín Parsons queries the placing of Mangan’s poem and argues that it confuses literary and real geographies by situating Timoleage Abbey not ‘on the tranquil bend of an estuary’ but on the ‘edge of the roaring Atlantic’ (1987, 105).

Perhaps these ambiguities and errors mirror the poet’s own uncertain grasp on the place that he represents. As an employee of the Ordnance Survey, Mangan knew Cork best on paper. While John O’Donovan travelled around the island, Mangan was engaged in clerical work in Dublin. As the office of the Ordnance Survey was being wound up in 1841 and 1842, Mangan was copying down information about Cork, including material relating to different townlands and passages from early modern documents.

Just as the Mangan’s experience confuses distinctions between intimate and official kinds of knowledge, so the mixed marine environment imagined in the poem does not allow for a defined difference between river and sea, or silence and sound. We continue to read his poem because of its ability to express questions, and provoke debate, not only about definitions of estuaries and coast, but also about the ways in which the natural world has changed over time.