Complex interactions between marine organisms and their environment are what produce the resources utilised by coastal communities around Ireland, and the rest of the world.  Food webs comprise 5 levels: 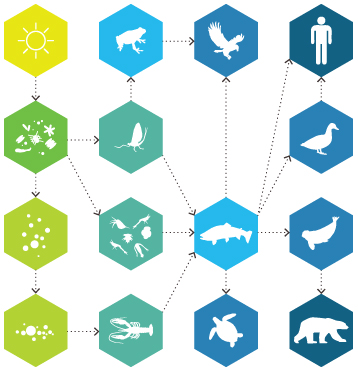 The basis of all food webs, including the marine, is that of a primary producer. These organisms are the lowest level of the chain and provide all other levels with the energy required for survival. Photosynthesising phytoplankton (e.g. Diatoms, Coccolithophores, Dinoflagellates, and Cyanobacteria) utilise the sun’s energy to grow and reproduce and act as a vital food source for the next level of the web. Other primary producers include larger algae and marine plant life.

The next level is made up of the smallest floating animals: zooplankton. These organisms can be single-celled or multicellular (such as amoeboids and cillates). They are eaten by larger zooplankton, such as copepods and larval forms of mussels and jellyfish, small fish, and marine invertebrates.

Fishing Down the Web

In food webs, reducing the populations of lower-level organisms have knock on reductions to the higher levels, through deprivation of food sources. Conversely, reducing the number of predators will cause an increase in numbers of the lower levels which will result in a “boom” of production in the lower levels.

On a long term basis, this rapid proliferation eventually creates a depletion of resources leading to competition and population decline of the lower levels until the web itself collapses and ceases to exist. On a commercial level, the proliferation of smaller species due to a lack of predation, may result in fisheries increasing total catches of smaller fish, which in turn can can lead to overfishing. This process is known as ‘fishing-down-the-web’ and was first demonstrated by Daniel Pauly (Pauly et al.,  1998).