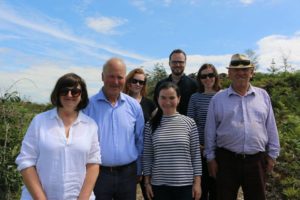 We began our trip through Castletownshend with a visit to Drishane House, to meet with Tom Somerville and undertake a tour of the house, museum and gardens. Built in 1780 by Thomas Somerville, Drishane House has been home to the Somerville’s for 9 generations, and still holds a commanding view of the bay. The current museum, occupies the original studio of Edith Somerville, the acclaimed writer and artist, whose works are on display throughout Drishane house, and are also part of the Crawford Art Gallery Collection.

From here our team met with Robert Salter-Townshend who guided our party for the remainder of the day.  Of particular interest to the team, was the site on which Nelson’s Arch was erected following the British victory over French and Spanish fleets at the Battle of Trafalgar in 1805. This monument, survives now only in the historical record. A watercolour by the monument’s architect, Captain Joshua Rowley Watson is on display in the Crawford Art Gallery, and gives some indication of its original form and scale. Very little seemed to have been written about this monument and yet it was an essential part of the political discourse of the area, so it was a particular treat to be able to speak with somebody who knew so much about its short lived, and tumultuous chronology.

Our tour through Castletownshend concluded with a visit to St Barrahane’s cemetery, to view three stained glass windows of the late Harry Clarke, and to visit the burial place of Violet Martin and Edith Somerville.